On-Chip Inductor Based Step Down Converter with Fast Transient Response

The number of smart appliances is increasing at a rapid rate. Compact size and high-power efficiency are critical requirements for smart systems like the Internet of Things (IoT). The trend of system miniaturization necessitates the need for an on-chip system solution. System power supplies are critical in determining system area and efficiency. For efficient operation, an electronic system requires dynamically adjustable voltage levels depending upon the mode of operation.

Circuits operating over a high frequency demands different loading currents under heavy and light load. This dynamic behaviour causes the current change in the system, abruptly. The sudden load changes at high-frequency cause overshoot and undershoot of voltage and current for hundreds of the cycles of switching frequency, causing the performance degradation. So the control loop needs to be designed to improve the transient response of the system with minimum overshoot and undershoot.

For the circuits operating over a wide current range, the operating frequency needs to be adjusted over a wide range for optimal operation under heavy and light loads. The sudden change in load current causes voltage overshoot or undershoot. The control loop needs to adjust frequency to overcome the overshoot/undershoot, and provide efficient operation under new operating conditions. Thus, for fast convergence, and limiting overshoot/undershoot the control loop needs to be fast to improve the transient response of the system with minimum overshoot and undershoot.

The approach to implementation:

In this work, our area of interest is focused on the design of a fully integrated on-chip DC-DC step-down converter with a fast transient response. DC-DC Converters usually consist of a power stage and a control stage.

The power stage controls the efficiency of the converter. The power stage usually consists of switches, inductor, capacitor and load. Fig. 1 shows the circuit diagram of the DC-DC step-down converter. When switch S1 is on, the inductor stores the energy and the output voltage becomes equal to the input voltage. When switch S2 is on, the inductor is discharging through switch S2, which results in a lower voltage as compared to the input voltage[2]. 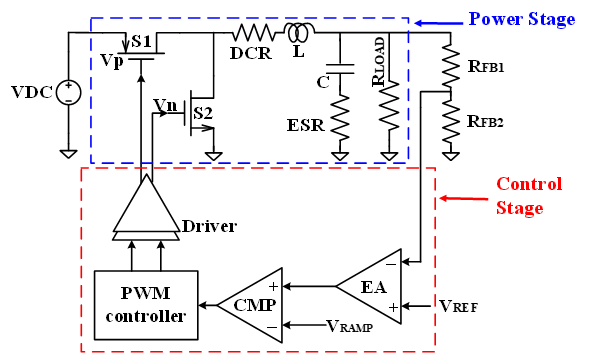 The transient response of the system is limited by the control stage delay as well as the LC network of the power stage. A novel technique is proposed in [5] where a SAR ADC is utilized to control the current pump which eventually injects current or out to the system depending upon the undershoot or overshoot. This eventually improves the transient response. However, SAR ADC utilizes a precise clock as well as multiple clock cycles to generate the corresponding bits for the current pump. Our proposed architecture is to improve the transient response of the system by replacing SAR ADC with pair of hysteresis comparators. the proposed block level diagram is shown in Fig. 2.

It will not only reduce the area of the system but also helps us to achieve maximum efficiency with the fast transient response. The target specifications of the proposed design are summarized in Table 1.

In this work, a fast transient response on-chip inductor based DC-DC converter is proposed. The proposed design provides stable operation over wide input (3.3 V to 5.0 V), and output (1 V to 3.0 V) voltage range, with fast settling time of less than 1μs, at 85% peak efficiency. The design is an improvement on SAR ADC assisted DC-DC converter.