Memories in biomedical systems needs to be highly power efficient to prolong battery life. Whereas, their performance constraints are considerably relaxed. Biomedical wearable systems such as body-area sensors and hearing aids, battery lifetime determines the time between battery replacements. This constraint requires that power consumption of less than 100uW. Since, the minimum energy point lies in subthreshold region [1], so that is the main driving force to operate the memories in subthreshold region. Figure 1 depicts the SRAM architecture, which consists of following blocks: 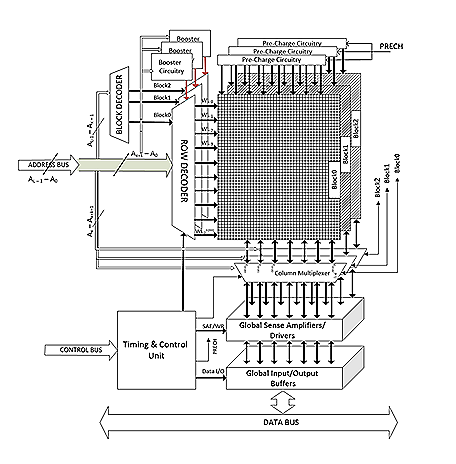 SRAM mainly consists of back-to-back inverters for data storage. The primary challenge of writing into the memory is to overcome this positive feedback from back-to-back inverters. The proposed design, uses stack PMOS transistors, is data aware means that before writing into the memory it blocks the voltage (so that there would be no fight between already present data and the incoming data). In this way, both write energy and timings are improved in the proposed design. The schematic of the proposed subthreshold SRAM cell is shown in Figure 2. This design is inspired from this VLSI paper [2]. 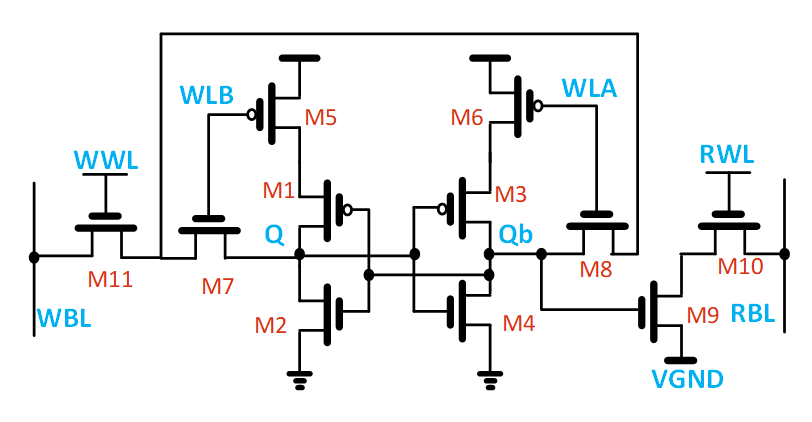 This design has several features. Firstly, It is data aware and it uses single bitline for writing operation, when the data is ‘1’, it turned on M8 and turned off M6 and similarly when data is ‘0’, it turned on M7 and turned off M5 in order to avoid the fight between already present data and incoming data. In [2], it uses write assist techniques such as word line boosting and negative bit line, which not only increase the silicon area (by generating those voltages on chip) but also make the circuit operation complex. In the proposed design, there is no write assist is used at all. Secondly, the energy and performance figures are better in the proposed design as compared to [2] . Thirdly, the proposed design uses dynamic voltage scaling (DVS) in order to achieve low power. Finally, the data retention voltage (DRV) is estimated by using Monte Carlo simulations and cell is sized for Read static noise margin (SNM) of 100mV. The target specifications of the proposed design are summarized in Table 1.